What’s the deal with all the .99s we see at the grocery store? 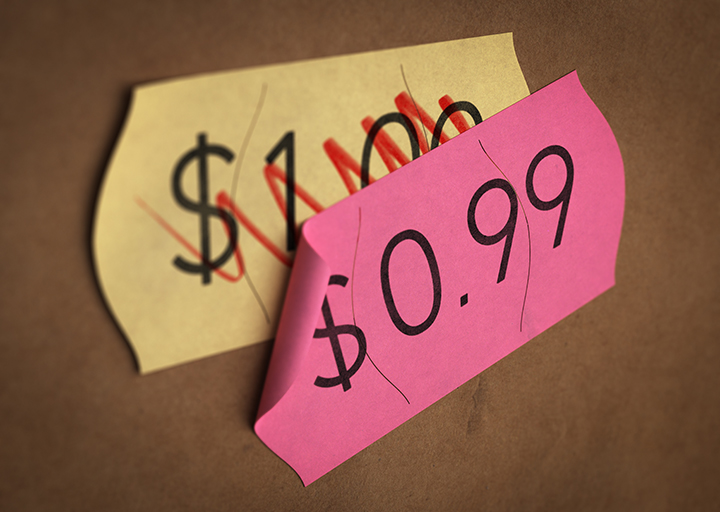 Why not just round the prices up?

“There’s a hypothesis in the retail industry that customers ignore everything after the decimal,” explains associate professor of marketing Dan Padgett, who studies the psychology of pricing. “If something is $14.99, then the customer often sees the $14 and ignores the .99. It’s a way to capture more every time you sell a product.”

“We’ve done some research where we have stopped people at the grocery store and asked them, ‘Give us an estimate of how much is in your buggy,’” Padgett notes. “We asked them to literally predict how much they had spent so far. They’re not very good at it (suggesting again that customers ignore the $.99 attached to most grocery items).”

Padgett, who co-authored pricing research “Left Behind: The Potential Downside of Odd-Ended Pricing” with fellow Harbert College associate professor James Carver, identified another motive behind the .99 pricing. “Part two … there is also a hypothesis out there that if the customer sees the .99, they take it as a small discount from whatever the next integer must be,” he says.

Instead of paying $30 for a new shirt, the consumer pays $29.99 and goes home feeling he got a deal.

But odd-numbered pricing that ends a penny short doesn’t work best for all products or services, Padgett says. “You don’t always see it when you go into the jewelry store, for example, and you’re looking at a necklace. The reason why you don’t see it that way, at least in the better stores, is because they realize that the price communicates the luxury and the value of an item. In that scenario, the zero helps you rather than having .99 endings.”

This philosophy doesn’t necessarily apply only to luxury items. Prices for high-risk services, too, should not end in .99s. “Think about LASIK surgery,” Padgett says. “If you can get your LASIK done for $299.99 an eye versus $300, it is way more preferred to use the $300. Why? It’s a high-risk service and as a result, I want that to be more valuable and, hence, the communication of the price leads me to believe it has higher value or comes with a better quality. The assumption is prices that end with .99s are discounted. I don’t want discount on something that’s high risk.”

The next time you go shopping for everyday household items, or must undergo an important procedure, think about the listed prices and the strategy behind them.