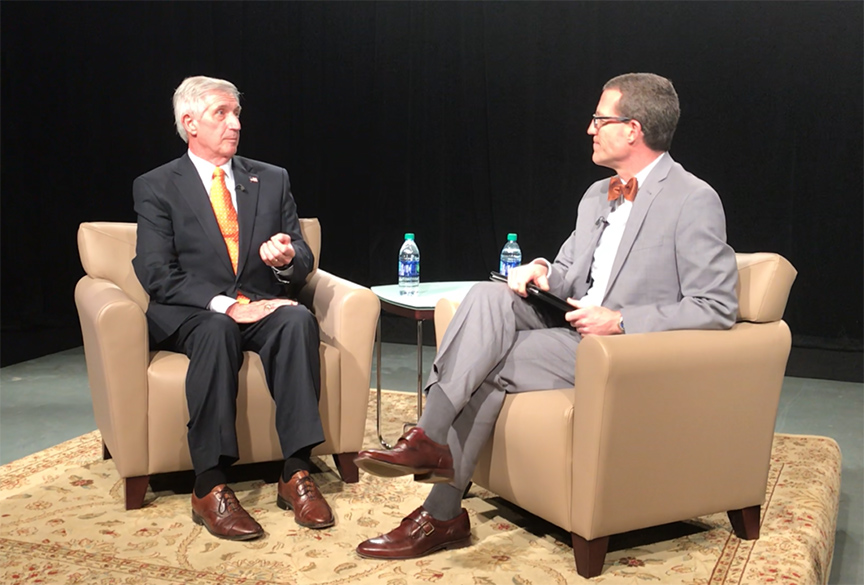 Two colonels stepped into Andrew Card’s office, shut the door and said, “This is top secret. You cannot talk about this to anyone.” The men handed the former industrial engineer a laminated card that told him precisely what to do in a time of crisis.

“Take this seriously,” they told the former White House Chief of Staff. “The president has designated you to be one of the people who goes with him in case there is a nuclear attack. Here’s a pager. We will always know where you are and will always know where to reach you. If this pager ever goes off, follow the instructions on the card.” 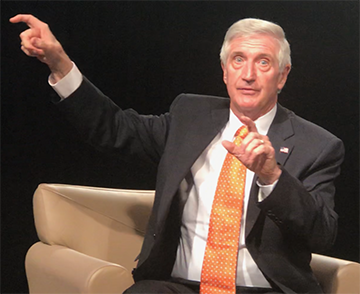 He didn’t take much time to consider his options. “I carried the card with me at all times and I have followed those instructions,” Card said matter-of-factly. Card discussed leadership during times of crisis at Auburn University on Wednesday, March 7, in a pair of sessions hosted by the Harbert College – one a private gathering, the other a public open forum at Foy Hall.

As an advisor within the Reagan administration and the administrations of Presidents George H.W. Bush and George W. Bush, Card worked with some of the most influential men and women in the world. Some made, or suggested, national policy. Some were the presidents’ closest advisers during times of crisis.

When two jetliners struck the World Trade Center on the morning of 9/11, Card didn’t panic before entering a second-grade school classroom, where President Bush was interacting with children. He already knew what to do. Card calmly walked into the classroom and whispered into the president’s ear, “A second plane hit the second tower. America is under attack.”

In the same way Card calmly approached the president and shared the news, Bush responded with similar resolve and didn’t take action until he and officials met in a private room moments later.

“Personal discipline is significantly important for every leader to have,” Card said. “I don’t think you can become a leader if you haven’t demonstrated the ability to lead yourself. But you have to lead yourself and you have to be careful that leading yourself doesn’t turn into arrogance.”

That’s why advisers, whether the White House or the top of any organization, are important, Card said.

“Seek counsel from others and do it with an open mind,” he added. “The best leaders are not the ones who think they have the answers exclusively. You (leaders and advisers) have to be part of a team. Be part of a team that says, ‘I’m supporting you even though I don’t agree.’”

Card went further into the teamwork aspect, saying, “They (leaders) have to offer their own counsel, but don’t crowd out other counsel. Don’t be a bully in the process. Be open and equal to participate in the debate. Have a rational debate. There can be emotions expressed in it, but don’t have a debate that is cruel and abusive. Sometimes in the White House, there are arguments – and there should be arguments. But I never wanted to see an argument that turned personal.”

With the second-longest tenure of any White House Chief of Staff in history, the Massachusetts native said it was important that the president be in a climate that invites judgment rather than the angst of emotion. “I wanted to help the president make sound decisions because there were significant ramifications to any presidential decision and I didn’t want those decisions to be made in a time of anger.”

Card added that reacting to obstacles often defines leadership. “If you are a leader that hasn’t been given any challenges, then we don’t know if you’re a leader,” he said.