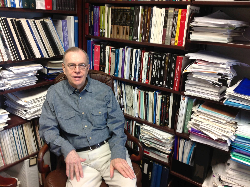 Jim Barth believes in research that makes a difference. It’s no wonder that his papers on the regulation and supervision of financial markets have been downloaded – and cited – by fellow researchers. Barth’s work was recently downloaded for a 15,000th time on the Social Science Research Network (SSRN), an online research repository that connects scholars around the world to each other’s projects.

“It’s good to have other academics as well as researchers at bank regulatory agencies pay attention to my work,” said Barth, Lowder Eminent Scholar in Finance at the Harbert College of Business. “People will, subsequently, write their own papers and hopefully include my papers among their references. This means they depended, to some degree, on my research papers in for conducting their own research.”

Not only has Barth’s work been downloaded 15,000 times by users on the SSRN, but his research has been cited 14,594 times, according to Google Scholar. Some of his most popular research includes, “Bank Regulation and Supervision: What Works Best?” “Rethinking Bank Regulation: Till Angels Govern,” and “Banking Systems Around the Globe: Do Regulation and Ownership Affect Performance and Stability?”

Barth believes that making an impact is “the purpose of research.”