Chris Maurice, who earned a degree in finance last spring from the Harbert College of Business, has been named a finalist for the Marshall Scholarship, which affords students the opportunity to pursue a postgraduate degree at any university in the United Kingdom.

Maurice will interview at the British Consulate in Atlanta on Tuesday, November 6. If selected, he will pursue two master’s degrees in the United Kingdom: public policy from the University of Cambridge and international political economy at The London School of Economics. 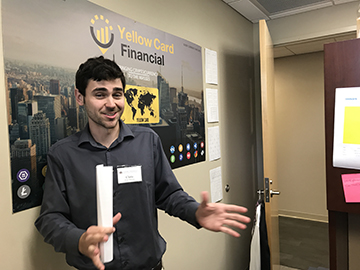 “The selection of Chris as a Marshall Scholarship finalist is not only exciting for the Harbert College of Business, but for Auburn’s entire academic community,” said Provost and Senior Vice President for Academic Affairs Bill Hardgrave. “His accomplishments are a testament to the quality of Auburn’s undergraduate programs and demonstrate our students’ commitment to leadership, research and service.”

Maurice is the chief executive officer and co-founder of Yellow Card Financial. This company takes two of the most talked about innovations of this decade, blockchain technology and cryptocurrency, and utilizes them to provide global economic access and security of funds to unbanked people. Maurice has built a network of retailers for distribution in thousands of locations throughout Africa and the U.S.

Among his many notable awards and achievements, Maurice has been named as a 2018 iMerging Young Leader by the Economic Development Partnership of Alabama and was named Entrepreneur of the Year at the University of Georgia’s 2018 “Next Top Entrepreneur” competition. He placed first at the Atlanta Regional Entrepreneur’s Organization Global Student Entrepreneurship 2018 awards and was selected as the Raymond J. Harbert College of Business President’s Medal recipient last spring. An Eagle Scout, for the past five years Maurice has served as a volunteer at the United Cerebral Palsy’s Camp SMILE in Mobile.

“I am honored to have been named as a finalist for the Marshall Scholarship. Should I be selected for the award, the formal education from Cambridge and London School of Economics will play a pivotal role in my continuing work with regulators and banks across the developing world,” said Maurice.

Created by the Parliament of the United Kingdom in 1953 as a living gift to the United States in recognition of the generosity of Secretary of State George C. Marshall and the Marshall Plan in the wake of World War II, the goal of the scholarship is to strengthen the Special Relationship between the two countries. Marshall Scholarships finance young Americans of high ability to study for a degree in the United Kingdom.

Up to 40 scholars are selected each year to study at the graduate level at an UK institution in any field of study. With between 30 and 40 scholars selected annually, and with the number of university-endorsed applicants approaching 1,000 it is one of the most selective graduate scholarships for Americans and it is widely considered one of the most prestigious scholarships for U.S. citizens.