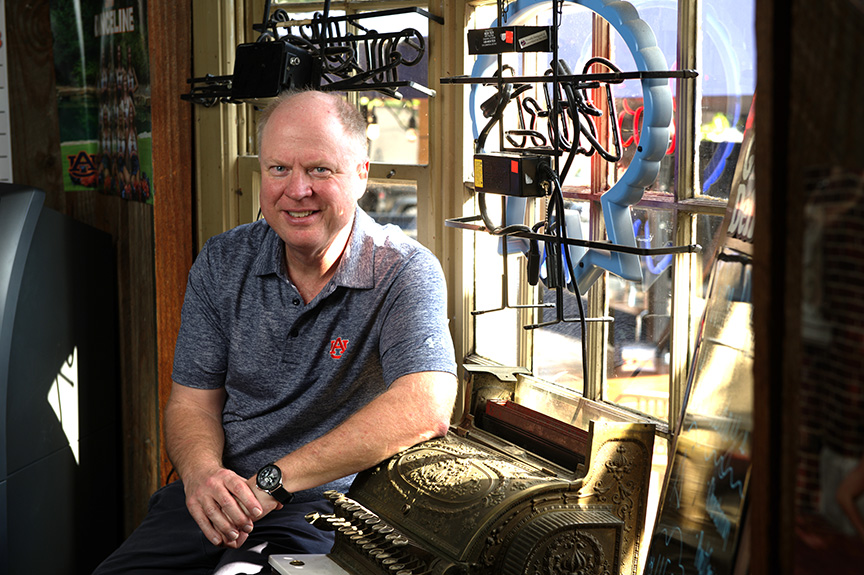 The word “research” evokes images of scientists wearing white lab coats in a lab full of beakers. But important discoveries are made beyond the sciences in all fields.

For Dave Ketchen, Auburn University’s Harbert Eminent Scholar and Professor of Management, research is the difference maker— it can be the deciding factor when contracts are awarded; it helps lay the foundation for entrepreneurs moving their ideas into reality; and it distinguishes between elite business schools and good business schools.

“Research is vital because it helps you create knowledge, improve lives and build your brand,” said Ketchen, who in 2018 won the university’s top research honor, the Creative Research and Scholarship Award. The honor recognizes faculty members who have distinguished themselves through research, scholarly works and creative contributions.

Ketchen focuses on strategic management, entrepreneurship and supply chain management, and, away from campus, he researches and devotes time to his hobby of Austin Healey cars.

Ketchen joined the Auburn faculty in 2006 and, over his career, has written six books, published more than 160 articles in scholarly journals and had his research featured in The Wall Street Journal, Forbes Magazine and many other publications. His many awards include the Southeastern Conference’s 2018 Faculty Achievement Award for Auburn. 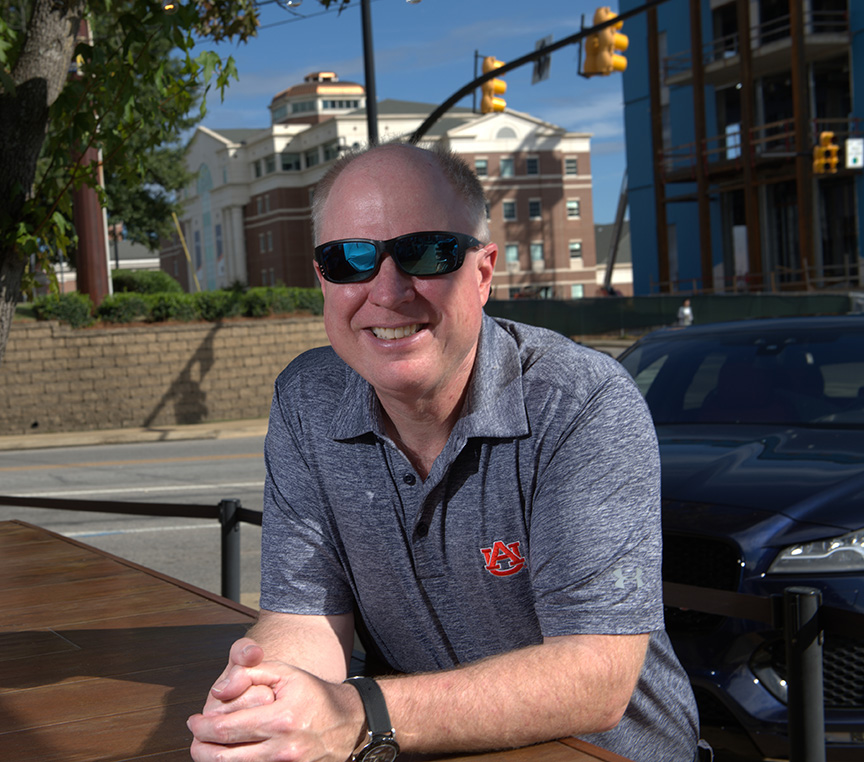 In 2012, he was awarded the Smeal Graduate Distinguished Achievement Award by the Smeal College of Business at Pennsylvania State University, his alma mater, becoming the first academic to receive this lifetime achievement award. He earned his bachelor’s degree in marketing in 1988 followed by his doctorate in 1994 in business administration with a concentration in strategic management.

In addition to statistics produced by studies, though, he knows that personal, long-lasting relationships, especially with former students, are the key to helping implement any research. It might even result in billions of dollars.

Case in point: One of his former students was working for defense-technology company Raytheon as it competed for an $11.2 billion contract that included classroom instruction, simulation and field exercises. The former student’s first call was to Ketchen, his mentor. “I put together a six Ph.D. team,” Ketchen said. “We had knowledge of organizational structure, entrepreneurship, strategy and supply chain management, and we helped Raytheon win the contract. Raytheon said our ‘academic’ knowledge was the difference.”

Research must be put into the hands of those who need it.

“I like to put people together to help each other,” Ketchen said. “My radar is always up for who might be able to help others. Students, really everyone, should find role models and reach out to them, such as alumni who have started successful businesses. They consider it a compliment.”

To facilitate the connections, Ketchen seeks out these role models to speak to his entrepreneurship class. One prominent speaker is Stacy Brown, who started the highly successful Chicken Salad Chick in 2008; the franchise now has more than 100 location in 10 states. Another is Clay McInnis, owner of Commerce Consulting, a company that manages small political and trade associations. In 2011, McInnis was named one of BusinessWeek’s “Top 25 Entrepreneurs Under 25.” Field trips to business locations are incorporated as well, such as visits with Traweek Dickson, president of Joe Hudson’s Collision Center.

“Students see their success and learn from them,” said Ketchen, who adds that so-called book learning remains vital because textbooks are based on volumes of real-world research and implementation. “Textbooks are the product of research studies, so students are learning from research.”

Ketchen’s research led to his authoring of the textbook, Mastering Strategic Management, that is widely used among U.S. colleges of business. His innovative teaching methods also include his three graphic novel textbooks, which might look like thick comic books, but are in actuality a proven educational tool. “Many students are visual learners, so these books help them learn,” he said. “Students like using the books.”

He says it is also important for business faculty to share knowledge beyond textbooks and professional journals. In 2017, he penned an opinion piece, based on his research, for the Wall Street Journal titled “The Downside of Independent Boards,” which went against popular opinion that independent boards were inherently better than ones with company officials on them.

“After the Enron and WorldCom scandals, the 2002 Sarbanes-Oxley Act said outsiders need to make up boards because CEOs had been putting their family and cronies on them,” Ketchen said. “However, we found if a CEO is the only insider, it hurts the company through an average 10 percent drop in profits. We also found that companies with lone-insider boards were 27 percent more likely to commit financial misconduct. If only one insider is on the board, the CEO controls what information other members receive and some CEOs take advantage of that information gap.”

To be elite, we must compete

Conducting and publishing research, he says, helps determine which business schools are among the nation’s elite. “To be elite, we must compete,” Ketchen said. “We need to compete for space in the best journals and publications. We need to compete for the best faculty and work hard to retain them. Retaining top faculty is smart business because it almost always costs more to replace a top professor than to keep one, assuming a suitable replacement can even be found. Also, we need to recruit the best Ph.D. students and help them achieve excellence.”

He credits former Dean Bill Hardgrave, now Auburn provost, for putting Harbert College on the path to being one of the nation’s elite public business schools, and says Dean Annette L. Ranft brings an elite business school mentality to the faculty and students.

“We are seeing our high rankings continue to go up,” Ketchen said. “Research helps our rankings. All business schools at universities like Auburn have really good teachers—the difference is conducting research that advances knowledge and improves lives.”

A salute to veterans

While Ketchen enjoys helping all students, he has a special place in his heart for our nation’s veterans. He has helped numerous veterans start businesses and has participated for several years in the Entrepreneurship Bootcamp for Veterans administered by Florida State University, where he worked prior to joining the Auburn faculty. Both of Ketchen’s parents worked for the Defense Logistics Agency and his father was in the 1st Infantry Division in the 1960s. His mother’s father was a Navy aviator in WWII.

“The goal of the EBV program is to put veterans in a position to start a successful business,” said Ketchen. “They create a business plan during the program and then they receive support as they launch their businesses. Many franchises give discounts to veterans.”

One success story is his former EBV student and retired Army Sgt. Renee Floyd who started BRF Mobile Lube Services in Phenix City, Alabama, in 2007. Floyd said the idea of opening her own business began in the deserts of Iraq in 2004.

“I was ready to retire from the military but I had no idea of what I wanted to do,” Floyd said. “During my mulling process, I realized that the easiest thing I did as a mechanic was change oil. I had often wished that we [Army mechanics] had a way to do the simpler jobs such as oil changes on line when the bays were full so after some brainstorming and conferring with a Senior Warrant Officer within my unit, I decided that I would open a mobile oil changing business.”

From classic cars to brewing science

Floyd often visits Ketchen and his wife, Sharon, and recently made the short trip to Auburn to enjoy the Ketchens’ automotive hobby—driving their 1967 Austin Healey.

“In 2008, Sharon was diagnosed with brain cancer,” Ketchen said. “She is doing okay now, but, we can’t vacation like we used to. We were watching TV one day and saw an Austin Healey show. We bought one in 2012 and I joined the national Austin Healey Club and got involved.”

Ketchen writes for and helps edit the Austin Healey Club magazine and he has written articles for Classic Motorsports and Grassroots Motorsports magazines.

Another passion for Ketchen is helping conduct Auburn’s Brewing Science and Operations Program, a graduate certificate course for students over 21 who possess a college degree, in which he teaches a class on the business of brewing. He is one of six Auburn faculty who kicked off the program in 2015.

“We have had dozens of participants, most of whom did not have business experience when they enrolled. Many have now started their own breweries, and I hear from them often about how their businesses are excelling.”

Once you’re Dave Ketchen’s student, you’ll always be under his watchful eye.