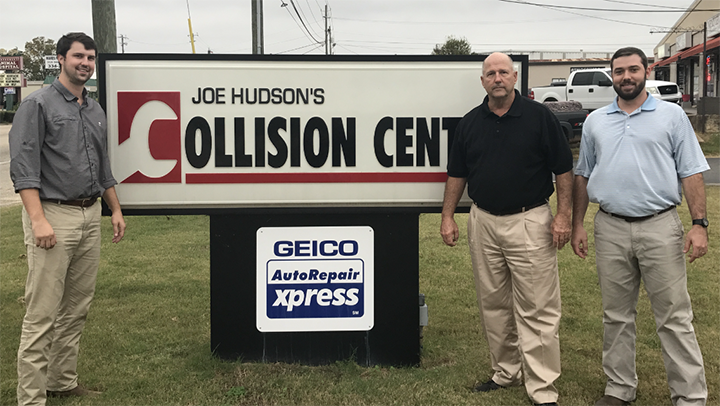 Traweek Dickson didn’t become CEO and president of one of the south’s largest auto collision repair chains by coincidence. It took a lot of work – hard work – to borrow a line from the Auburn Creed.

“You’re not going to be successful if you don’t work hard,” said Dickson, a Montgomery resident and 1977 Harbert College of Business graduate who heads 60 Joe Hudson Collision Centers. “There may be that rare businessman who can cut deals off of his yacht and he doesn’t have to work hard, but that isn’t the real world. Most people who are successful, most of the things that they have done is that they have outworked everybody else.”

Traweek Dickson, Jr., who earned an entrepreneurship degree from the Harbert College in 2016 and handles the business’ real estate and acquisitions, said his father “sets the standard.”

“My dad is the hardest-working person I know and anybody who has worked for or with him has seen the same thing,” he said. “While he’s tough on everybody, he wants you to do the right thing and is the fairest person as long as you are doing what you are supposed to be doing and get the job done. I am there to learn, and learn with the understanding that not all times we are going to agree on everything. But at the end of the day, I know Traweek Sr. has my best interest in mind and wants me to be the best businessman I can be. .”

His brother, Cameron, a 2013 Harbert College graduate with a degree in business management, agrees. “When I say he’s the hardest-working person I know, that’s not an exaggeration,” he said. “It’s almost like he enjoys it too much. We used to laugh when we all lived at home about when it rained because my dad would start organizing everything in the house because he had to have something to do.”

“When I got to Auburn, the business school was in the process of getting accredited,” he said. “So we were on a seven-point scale. There wasn’t a lot of room to mess up. You had to get a 93 to get an A, and I was all about making an A, so I studied all of the time. If I got one thing out of Auburn it was work ethic because I didn’t go in there with one.”

Dickson purchased his shop in 1989, partnering with Montgomery businessman Joe Hudson. Within the past three years, the business has thrived – growing locations from 1to 60 with repair centers in six states from Florida to Texas. In 2014, their organization was recapitalized by Carousel Capital, a Private Equity Firm from Charlotte, North Carolina. Joe Hudson’s Collision Center has since been on a growth plan to add 10 stores a year for the next several years.

With sons and other family members in management positions, Dickson said disagreements are rare. “None of us do the same thing,” he said. “Traweek is learning the real estate, growth part of the business. My brother is an estimator. My son-in-law is just beginning to manage a store. Cameron managed the Auburn store for a while and now he’s over 12 stores. It’s not like we’re a family sitting at the table trying to make a decision together or split up the money. It doesn’t work that way. That’s how we keep the peace.”