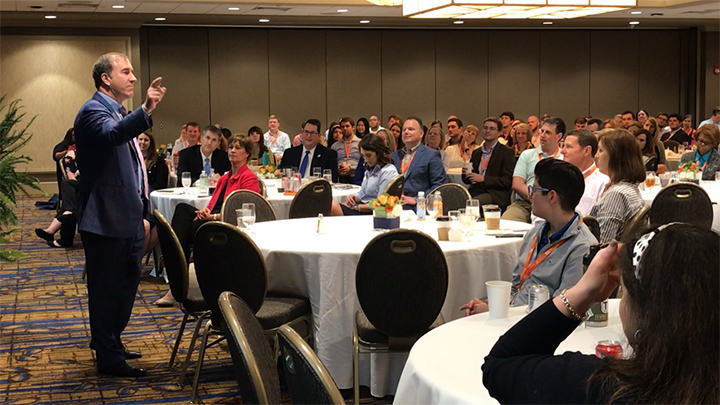 What’s the best means to detect fraud? Let’s take that a step further.

What are best means to report fraud?

Who better to explain this than forensic accountant and financial fraud investigator Harry Markopolos, the man who initially alerted the Securities and Exchange Commission to Bernie Madoff’s Ponzi scheme?

Markopolos served as keynote speaker at the Harbert CollegeSchool of Accountancy’s recent Accounting and Audit Summit, where 163 CPAs and 92 Master of Accountancy students learned from a variety of industry experts.

The ultimate means to detect fraud lies within the human component – the sharp-eyed whistleblower, Markopolos said. “Math is the truth,” he said. “If you can do math – you will find the truth.”

Markopolos urged students and professional accountants to look for the “too good to be true” and to assume fraud first until genius is proven. “There are a lot of companies out there that will fake it and are cooking the numbers,” he said. “You can’t cover up accounting fraud. It’s going to appear on your financial statements somewhere.”

Another sign – when a chief financial officer or general counsel leaves a given company. “Something’s going on,” said Markopolos, who believes employees are a firm’s front line of defense against fraud.

As a portfolio manager at Boston options trading firm Rampart Investment Management, Markopolos grew suspicious of Madoff through a trading partner. “I knew that something was wrong with the numbers because I was talking to people that were managing international portfolios and asking, ‘Sam, how much did you make last year in your international equity fund?’ He says, ’10 percent.’ Then I go to Mike, who invested with Sam, and asked, ‘How much did you get? ‘9.4 percent.’ Those are inexplicable differences in foreign exchange results for investors.

“I knew that if you are doing thousands of transactions in a same asset class, over time there’s a high and a low and you should be getting somewhere in the middle. You shouldn’t be getting a lot of highs and a lot of lows. If you see all highs and lows – that’s a manufactured distribution and that’s fraud.”

Investigators later estimated that Madoff duped investors out of $65 million.

“You’re going to see things that don’t look normal,” Markopolos continued in regards to fishy financial statements. “In an industry where everybody looks like a zebra, they (fraudulent reports) are going to look like a chicken.”

Once fraud is discovered, then what? Reporting your findings to upper management might not be the best idea, he said.

“I know a whistleblower who went to the CFO of his company and said, ‘It looks like we are running a Ponzi scheme,’” he said. “The CFO said, ‘Yes, but don’t tell anyone.’ Three days later, the guy says, ‘I need to say something.’ He goes to the chief compliance officer and then wonders why he is escorted out the door. Whistleblowers are too trusting of the company. They report it up through the compliance ranks and wonder why they get fired.”

Markopolos said the safest approach was to report the information to your direct supervisor via email – just once.

“Blow that whistle one time, and if there is no response then you might consider leaving,” he said. “You could also go to the press. You could file a whistleblower case, but that could take years. What we know about the Securities and Exchange Commission is that it’s understaffed and there are too many cases.”

“Fraud is a non-contact sport if you’re a fraud examiner,” Markopolos said. “It’s not for the faint of heart, but I think it’s a lot more exciting than any other form of accounting that you can do.”