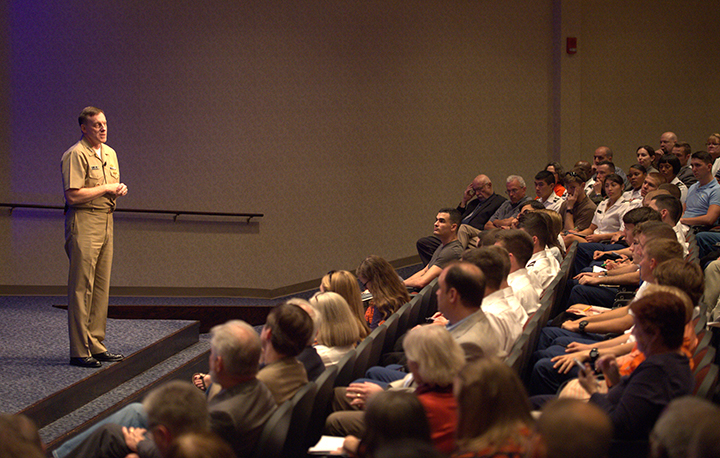 What cyber threats have the highest potential for destruction? What threats have the greatest chance to succeed even with minimal damage? What should concern security officials most? What can be done to stop them?

Navy Adm. Michael Rogers, National Security Agency Director and Commander of the U.S. Cyber Command, addressed these issues and more before a large audience on Friday, Oct. 21, at the Auburn Hotel and Dixon Conference Center. His talk, “Defending and Operating in Cyberspace,” was part of the ongoing This is Auburn Speaker Series.

“Cyber threats are a problem that will affect all of us, privately and at work,” said Rogers, a 1981 Harbert College graduate in information systems management. “It’s not a challenge that will go away. We call it the World Wide Web for a reason. We use the web as a vehicle to remotely host thousands of devices, but we need to make a conscious decision how many remote access points we need because every one of them is a point of vulnerability.” 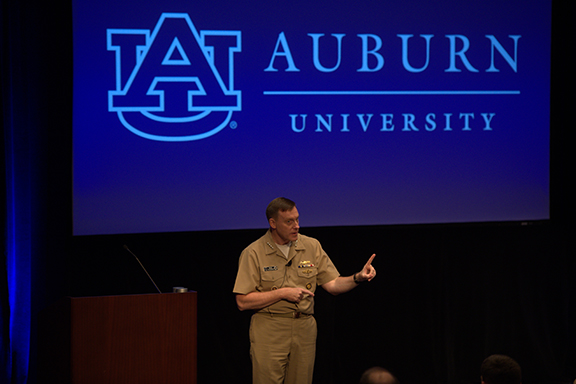 The estimated annual cost of global cyberattacks annually is $400 billion and could approach $2 trillion by 2019, according Forbes.com. Rogers said that “60 to 65 percent” of cyberattacks are criminal. Others might be state-sponsored. It was recently alleged by the Department of Homeland Security that Russia is connected to information stolen from the Democratic National Committee and released on WikiLeaks.

“Many nations do not recognize that there is a price to pay for specific behavior,” warned Rogers. “We’re in a dynamic now where there is little stopping groups from engaging in this behavior.”

Rogers called for greater cooperation from the public and private sectors and among each other. “We need better dialogue, but we are polarized socially,” he added. “We vilify each other. ‘You are bad. I am good.’ You can’t solve problems that way. Instead of (private industry) sharing information, they leave it up to finding out on their own. Why can’t we learn from this and share with others?

“Private businesses can’t solve this on its own. It is not realistic to say that government can do this on its own. Technology has outpaced legal frameworks. Improved and advanced technology complicates things. But you don’t necessarily want the government in your private networks. It doesn’t mesh with our construct as a nation.”

Rogers said the U.S. government should continue to work hard to protect citizens from cyber threats – but asked “where is our comfort level?” when it comes to government intrusion. He cited the Constitution that it is the power of the state to “ensure peace and tranquility.”

Defending cyber space will only become increasingly difficult as enhanced technology continues to evolve, Rogers said. “Change is an inherent nature in man. I don’t expect that dynamic to change. But if it is designed by a man, it can be defeated (hacked) by a man.”