Joe Patching, who graduated from the Harbert College of Business in May with a degree in finance, was recently awarded the NCAA Postgraduate Scholarship.

Patching, an All-American and All-SEC swimmer from Ascot, England, will soon begin work at Deloitte as a consultant within the company’s risk advisory subsidiary before returning to school and completing his MBA. 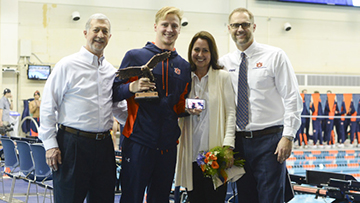 “Auburn University has given me the privilege to learn from so many great leaders and mentors,” said Patching, an active member of Harbert College’s Financial Management Association Honor Society and Regions Bank and Lowder Scholarship recipient. “From the outset of my freshman year, I was provided the support and encouragement needed to develop both academically and athletically. To be nominated for this nationally-competitive award shows the degree of opportunities Auburn provides its students and athletes.”

The NCAA Postgraduate Scholarship takes into account a student athlete’s GPA, served as a distinct member of his or her school’s team, was an active participant in institutional and community service, and serves as a role model and student leader.

Accolades are nothing new to the former Tiger captain, who set a new Auburn record in the 400 individual medley and finished 10th at the NCAA Championships. Not only was he the first Auburn swimmer to win the SEC championship in the 200 backstroke and 200 individual medley, but he was selected in 2016 as Auburn University’s Male Athlete of the Year, received the SEC’s Community Service Award and made the SEC Academic Honor Roll. He is a recent nominee for the prestigious SEC H. Boyd McWhorter Scholarship, presented each year to the conference’s top male and female scholar-athletes.

Patching, who also competed for Great Britain’s swim team at the World Games in 2016 in South Korea, says time management is key to balancing studies and training.

“As I have been swimming from a young age, this trait has become ingrained in me and I have used it to my advantage throughout college,” he said. “It is my hope that skills developed from being a competitive athlete will translate into a professional career outside of swimming.”

For now, Patching is putting swimming on hold and will concentrate on a business career.

“I hope to instantly make an impact within a professional setting and learn and develop from the new experience and challenges I will be faced with,” he said of his upcoming role at Deloitte. “With the goal of reaching upper management in the future, I will be seeking to gain an MBA after several years of employment. This will give me the education and knowledge needed to pressure this goal.

“Being a part of Auburn University and the Harbert College of Business has truly prepared me to enter the business world and immediately make an impact. At Auburn, you are surrounded by so many knowledgeable professors, mentors and peers to learn and grow from.”