The maximum annual percentage rate for a $100 loan through payday lenders in Alabama is more than 456 percent. Some rates allowed in other states are even higher.

While those numbers would seem forbidding to individuals who are struggling to make ends meet, many are choosing the high-interest lenders over local banks offering lower interest rates and more comprehensive services. Three Harbert College of Business professors in finance explore the reasons why in their paper, “Banks and Payday Lenders: Friends or Foes?”

Payday lending is prohibited in 13 states and the District of Columbia.

“Some people say they (payday lenders) provide a service. Yet, some states outlaw them,” said Barth, Lowder Eminent Scholar in Finance and a Milken Institute Senior Fellow. “It’s an issue –an important public policy issue – whether the rates they charge should be allowed because it’s typically not rich people that use payday lenders. That’s why we’re motivated to work on a project to better understand where payday lenders locate and who their customers are.”

Barth, Hilliard and Jahera discovered that the South – Mississippi, Louisiana, South Carolina, Oklahoma, Alabama and Tennessee, in particular, – has the most payday lender stores per 10,000 people. The researchers also reported that the presence of payday lending stores correlates to a community’s population of African Americans aged 15-and-under, as well as the education level of its citizens. 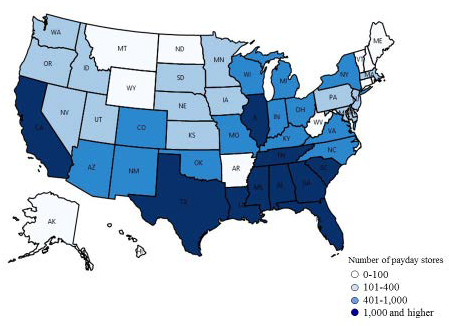 Payday loan regulations vary from state to state. For instance, six states (Delaware, Idaho, Nevada, South Dakota, Utah and Wisconsin) set no limit on the interest rate that may be charged. In other words, as the paper reads, “The sky is the limit.” In 28 states, including Alabama, lenders must “explicitly specify that triple-digit rates may be charged.”

Instead of paying high rates at a payday lender, Barth suggested the regulatory environment be changed so that some customers are afforded the opportunity to obtain the same services at local banks. By comparison, Alabama has 1,035 payday lending branches to 1,571 bank branches.

“People who borrow money from payday lenders are not people who are unbanked because to borrow from a payday lender, one needs verification that one has income and also that one has a bank account,” he said. “Regulating payday lenders more strictly is not the issue, but rather determining if one can impose fewer regulations on banks so that banks can provide similar services at lower prices. Right now, banks are discouraged -- or they are not allowed in some cases – to compete with payday lenders.

“Of course, one does not want banks to lend money to people who will not repay the borrowed funds. On the other hand, you don’t want to tell banks that they can’t lend to people, even risky people, because by definition – if you take the risk out of banking, you take the profits out of banking.”

Barth will present the paper at the 78th International Atlantic Economic Conference, in Savannah, Ga., on Monday, Oct. 13.