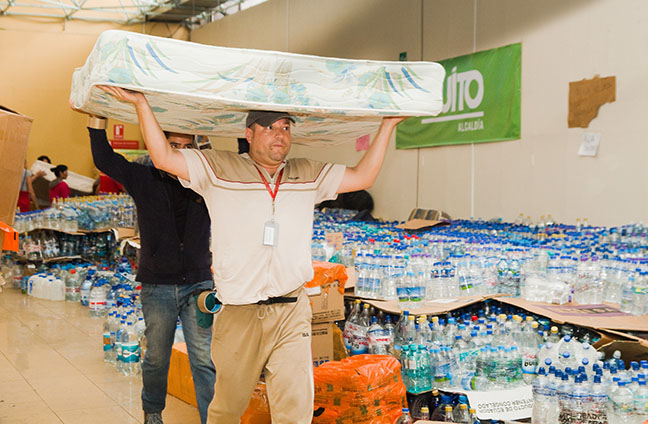 Trailers packed with supplies for residents displaced by a tornado filled shopping center parking lots in Tuscaloosa in April 2011. The relief efforts ran up against a problem – retailers and transportation companies wanted their spaces and equipment back.

“Those people said on Monday morning, ‘We want to go back to work,’” said Glenn Richey, Eminent Scholar in Supply Chain Management at the Harbert College of Business. “I was sympathetic to that desire, but the supplies in those trailers and parking lot were for people who had their homes destroyed. People who had no water and only the clothes on their backs. What do you do? Do you go back to business as usual, or do you step up and do what you can to help the community?”

Richey, who lived in Tuscaloosa at the time of the EF-4 twister that killed 64 and injured nearly 1,500, was among the hundreds who provided immediate disaster relief. He also weathered Hurricanes Elena and Frederic, lived in Xenia, Ohio, during the 1974 Super Outbreak tornado, and also in Oklahoma City during the EF-5 tornado that struck the nearby town of Moore, Okla., in 2010. He’s seen his share of natural disasters, and he’s seen his share of botched relief efforts, too.

His latest paper, “Disaster Resilience Through Short-Term Collaboration,” suggests the development of a governing framework that bridges the communication and management gap between public and private entities in the wake of disasters and gives relief efforts one unified voice instead of multiple, disjointed voices. As the Gulf States move toward the heart of another hurricane season, Richey insists that disaster relief plans be made proactively.

But how and under what framework?

“The sharing of information and the building of a body that works together to manage these situations, whether they are natural or man-made disasters, is the most important,” said Richey, whose paper was accepted by the Journal of Business Logistics.

Richey called on federal agencies including FEMA and Homeland Security, state and local agencies, and private businesses to come together.

The paper suggests that the public and private entities pre-determine:

“We need to ensure that everyone is focused on one outcome, understand the roles of each group and build their goals together so that they can achieve the protection of human life,” Richey said. “If a hurricane hits Bayou La Batre (Ala.), you’ve got to have the businesses in that community willing to cooperate with the government and share the information that they have, and have the government share important information as well.”

But who manages this group? “Because it’s such a disparate group of individuals, it has to be a board of people that doesn’t already exist and can be altered and enhanced quickly,” Richey said.

Then there’s another group – volunteers. Richey pondered how volunteer helpers could best be utilized. “How do you organize the bayou men on airboats in Louisiana?” he asked. “What about the people who want to help firefighters in California? Or short-term employees hired to clean up Gulf Shores during the Deep Water Horizon disaster? How do you develop trust and leadership quickly?”

A hurricane has struck the Gulf Coast. Where do the relief supplies go? Who will disperse them and where? How can businesses and public agencies work together?

“There’s nothing worse in one of these events than having merchants in the room and having someone from Homeland Security or FEMA say, ‘We don’t do it that way,’” Richey said. “Then the government wants to take a retail facility for three months and you’ve got managers saying, ‘I’m not going to make my quota.’ The end of this is essentially a call to arms for businesses and government to get together.”