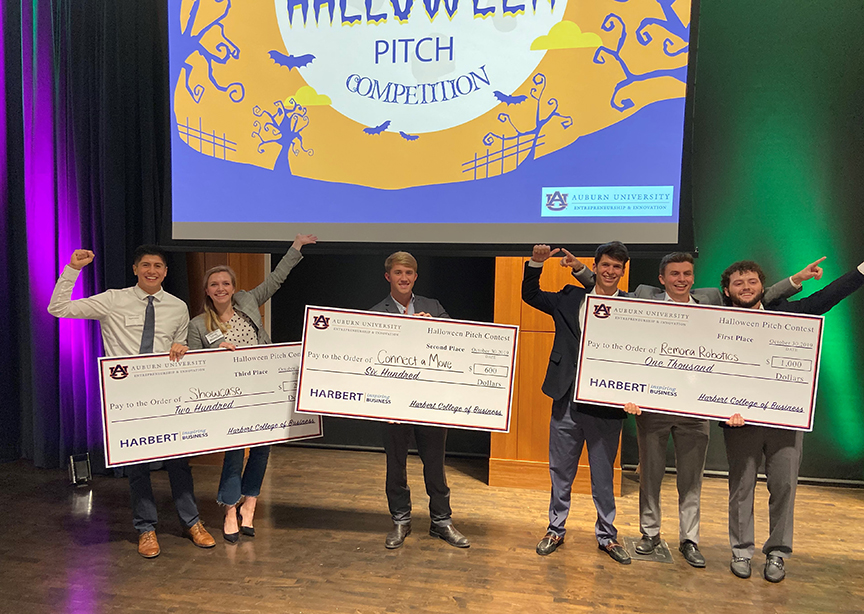 The winning team presented an environmentally conscious idea. It’s social entrepreneurship and it’s a lot of things wrapped into one solution."

Three aerospace engineering students at Auburn University believe they have a solution to reduce the amount of plastic waste around the globe.

Zack Wadzinski, Dakota Newsome, and Harrison Smith proposed an aquatic drone -- the Remora -- they claim is capable of collecting 40 gallons of trash and is 100 percent autonomous for charging, waste disposal and maneuvering waterways.

“The judges felt they had the most innovative and impactful idea,” said Lou Bifano, Director of Entrepreneurship Strategy at the Harbert College of Business. “The winning team presented an environmentally conscious idea. It’s social entrepreneurship and it’s a lot of things wrapped into one solution. The team did a great job of presenting their business idea in three minutes.”

Second place and $600 went to Connect-a-Move, an online marketplace for moving, presented by James Jackson, a student in business administration. Hipolita Davila, who is studying business analytics, and Lucy Mosteller, a second-year MBA student, took third place and $200 by pitching Showcase, a digitally-enhanced Bluetooth phone case that allows users to customize their cases via app software and instantly upload custom sticker collages, photos, gifs, and more.

Management student Joseph Connor also took home a $200 prize by winning the Audience Choice Award. His pitched product, BrewMat, is a 6-foot, 2-inch portable mat that allows Beer Pong to be played without fear of knocking over plastic cups. 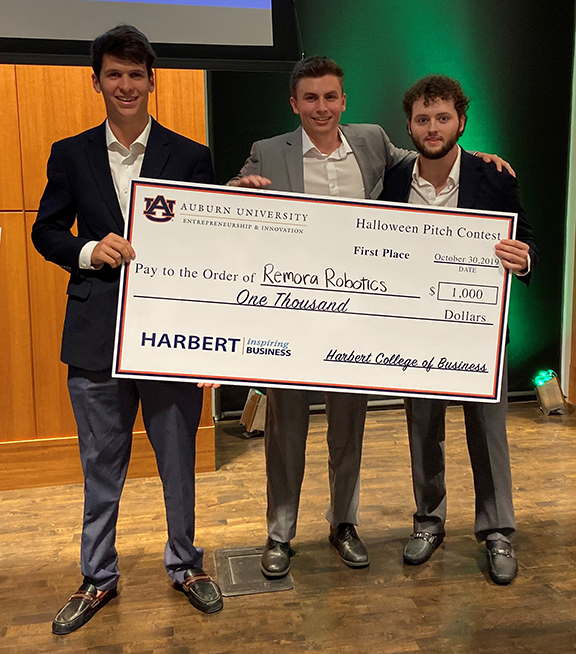 “We were really pleased with the number of different student ideas that we have and the quality of the submissions,” Bifano added. “We had students from six colleges and 19 majors with business ideas. It’s a wide range of different ideas. We offered a number of workshops and one-on-one mentoring sessions that coach them on how to make three-minute presentations and how to get their ideas across to the judges.”

In total, 30 were given three minutes each to present their idea before a live audience and served as a tune-up for next spring’s annual Tiger Cage Student Business Plan Competition where $50,000 is up for grabs.

“The prize pool was smaller -- $2,000 -- but the format gave them the opportunity to stand up in front of an audience of judges and an audience of listeners and see how they did as compared to standing up in your dorm room pitching to the wall,” Bifano said on teams using this event to better prepare for pitch competitions in the future.”

Deadline for teams to submit their business ideas for the 2020 Tiger Cage is Monday, November 25.

Teams will receive mentoring, pitch examples and further training from industry professionals on Monday, December 2, and again on Thursday, January 16, 2020. The competition schedule is as follows:

“Entrepreneurship at Auburn University is on the move,” added Bifano, “And it’s been on the move for the past several years. The rate and pace of what we’re able to provide to our students is accelerating.”

Students interested in getting more involved in entrepreneurship at Auburn University should email hcobent@auburn.edu for more information.