He loved Auburn University with his very soul and being. Going here became a dream for him. Everything he learned in business started with a foundation here at Auburn." -- Kimberly Kocian Gavin

How does one describe Chuck Gavin? For one, he loved Auburn with an unbridled passion. He was a dedicated family man and business man who put customers first and took MFG Chemical to even greater heights as CEO. Was he special? You bet. Just ask his father, Charles Gavin.

“He was special since the day he got here,” he said. 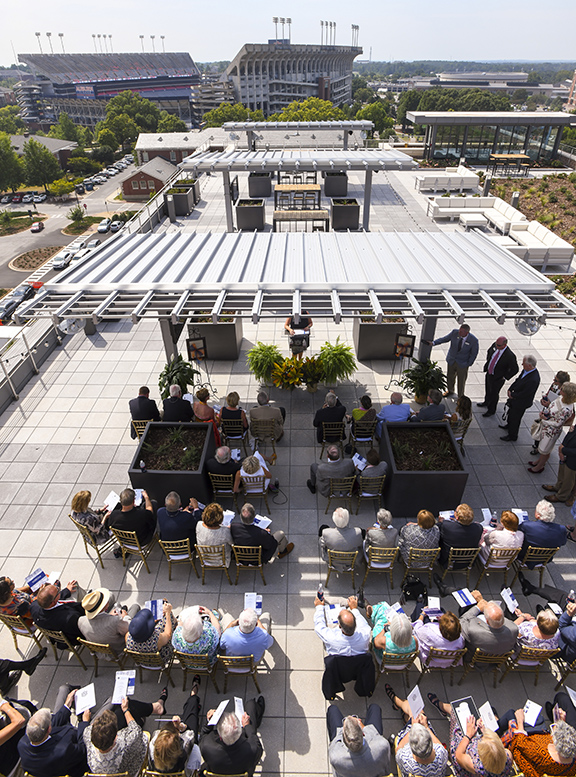 Charles Early “Chuck” Gavin IV, a 1982 Harbert College of Business alumnus, passed away on December 25, 2015. The rooftop terrace on the fifth level of the new, 100,000 square-foot Horton-Hardgrave Hall was dedicated on September 13 to the memory of Chuck Gavin by his wife, Kimberly Kocian Gavin and father, Charles Gavin.

Hours later, the Ginn College of Engineering dedicated a 44,000 square-foot garden, the largest in Alabama, adjacent to the Brown-Kopel Center in the honor of Carol Ann Gavin, Chuck Gavin’s mother.

Chuck’s passion for Auburn football was unequaled, which makes it especially fitting that the terrace in his honor overlooks Jordan-Hare Stadium.

“Chuck would be so proud to see all of you here to support him on this amazing space,” Kimberly Gavin told onlookers at the dedication ceremony. “It’s a lovely spot and it’s safe to say that Chuck’s spirit will be here every day, but especially on game day. He loved Auburn University with his very soul and being. He loved Auburn from the time he was a wee baby. Going here became a dream for him. Everything he learned in business started with a foundation here at Auburn.” 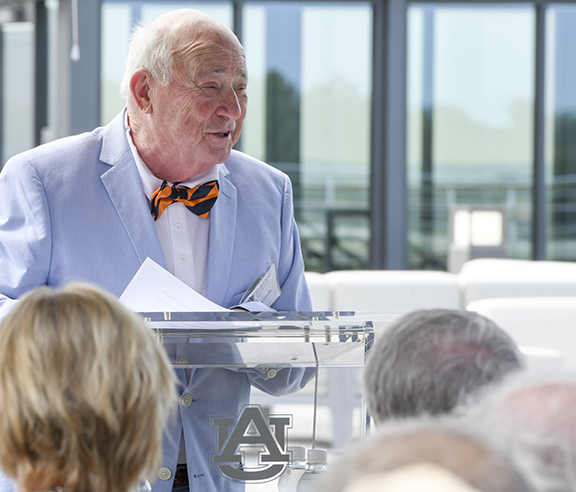 After graduating from Auburn, he joined the company his father started, MFG Chemical, in Dalton, Georgia. Gavin, who spent much of his youth in Columbus, Georgia, grew with the business to become CEO and his dedication and skill helped guide MFG to become a major player in the specialty chemical business.

“Our children usually do better than we do and Chuck led the company to new heights and certainly made his family proud,” Charles Gavin, a 1959 Auburn textile engineering graduate, said. “He had extremely good people skills, which served him both as a manager and for winning new customers. We treated our customers like partners. Chuck strongly believed that if you win one customer at a time, you build the right foundation. As we treated our customers like partners, it became a win-win. The partnerships that he helped form are still making MFG a win-win. Teamwork always wins and it will win for you.”

Harbert College of Business Dean and Wells Fargo Professor Annette L. Ranft thanked the Gavins for their contributions to the college, which will serve Auburn business students for years to come.

“The national reputation we are building for developing highly desired graduates and for generating knowledge that drives diverse business thought and sustainable practice has been made possible because of your support,” she said. “We cherish the opportunity to honor the Gavin family’s commitment to Auburn and the legacy of Chuck and his mother, Carol Ann. Our hope is that this legacy will inspire generations of Auburn men and women to consider the impact this institution has had on them and what impact they can have.” 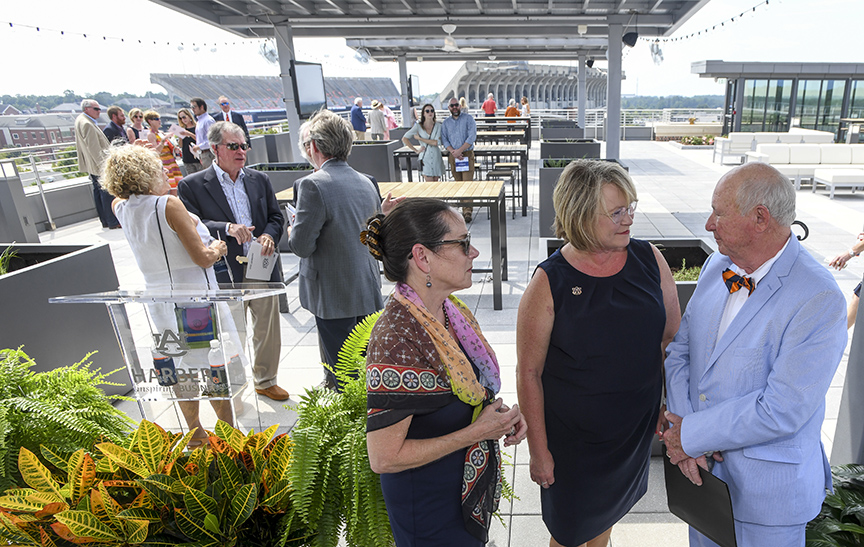