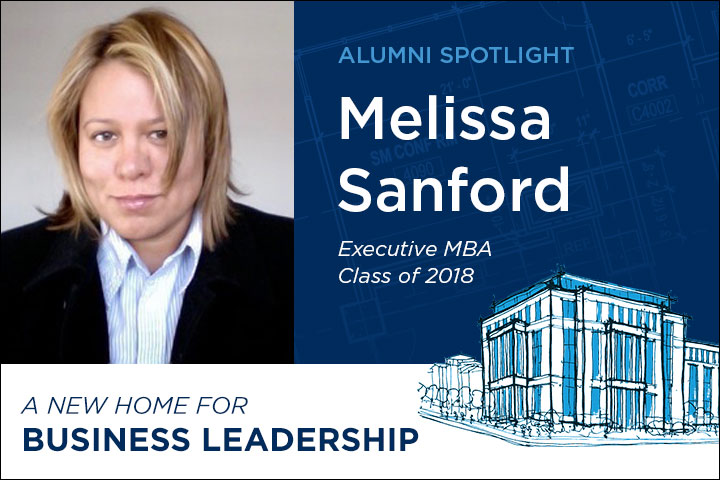 Auburn gave me the confidence and opportunity to pivot in the field. If you can take on grad courses and be successful, it proves to employers you are capable of learning new technologies."

Editor's Note: The Harbert College of Business is soaring. On September 13, we formally opened Horton-Hardgrave Hall, our new 100,000-square-foot business building. Alongside with Lowder Hall, this new addition is part of a world-class business complex that ranks among the nation’s best. What follows is one in a series of stories highlighting members of the Auburn family who have been the driving force behind our growing national reputation. To learn more, please visit harbert.auburn.edu

But she wanted to take her capabilities further, to grow in her entrepreneurial skills in order to pivot into the growing field of cybersecurity.

Sanford, who is now director of service providers at Symantec, decided to enroll in the Executive MBA program at the Harbert College of Business after researching programs at other schools for months. She was accepted to all the programs to which she had applied, but none of the others fit her needs as a professional and a student.

“When it came right down to it, I had an intensive schedule while working at Apple,” she said. “Programs were too costly or the schedules did not align with work. I couldn’t afford to take leave from my family to attend a prestigious Ivy League school, and I couldn’t imagine traveling five hours from home to attend school on Saturday and Sunday.

“Then, I found Auburn’s EMBA program. Not only was it affordable, but I liked the curriculum, the cadence of the program and the school’s academic rankings.”

I was able to walk away with new ways to strategize and, most of all, long-lasting friendships."

She enrolled in the class of 2018 and was immediately impressed by the high caliber of her classmates.

“We had such bright individuals who came from Marriott, GM and Vanderbilt, to name a few. It was good to share real-world experiences and collaborate with each other on team projects,” she said. “I was able to walk away with new ways to strategize and, most of all, long-lasting friendships. The final project also inspired me to think and plan like an entrepreneur.”

And she is spreading those skills, and a new professional direction, to aid others.

“At the moment, I am providing guidance as chief revenue officer to two other women as they start up their own cybersecurity firm, to help with the human element of cyber which is causing some of these breaches -- most recently, Capital One,” Sanford said. “Cyber is a growing field, but what is often overlooked is the human aspect that causes breaches.

“Auburn gave me the confidence and opportunity to pivot into the field. If you can take on grad courses and be successful, it proves to employers you are capable of learning new technologies.”

After earning her EMBA, Sanford was offered her current position at Symantec.

“The skills that helped were taken from finance and marketing,” she said. “An MBA is almost now a hard requirement for most business development positions. The EMBA enabled me to pivot into cyber from Apple, which has opened up a ton of opportunities for me.”