Steve Barranco helped bring courtroom drama to campus. There are no murder trials or assault hearings -- but abuse of the public trust might come up a time or two. 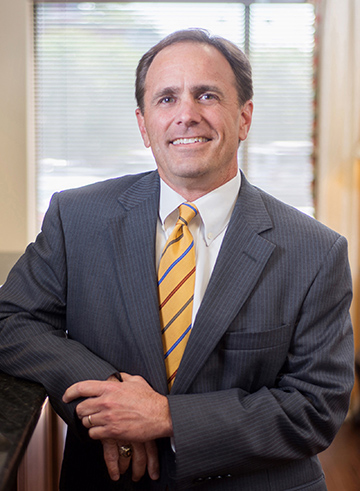 “What we try to do at universities is instead of just running through official business, we stop every two or three minutes and say, ‘OK students … here’s what we are about to do. You see that guy sitting across the room? Here’s what he has done and we’re going to turn this into a courtroom with a jury. He’s got his lawyers. We’ve got our lawyers,’” said Barranco, a 1989 Auburn accounting graduate, and one of seven members of the Alabama State Board of Public Accountancy.

One such hearing was held September 18 at the Harbert College of Business.

Bringing hearings to campuses does more than regulate licenses, but it also educates.

“We had this neat idea – if they are public meetings then let’s have them on college campuses,” said Barranco, a member at Warren Averett for 28 years. “Students might want to see this, and professors too. I raised my hand and said, ‘We are going to Auburn University for starters!”

Students and professors have been treated to a number of interesting cases, Barranco said. Weston Smith, a former Chief Financial Officer at HealthSouth caught up in an infamous accounting fraud, appeared before the board in hopes of having his license reinstated. He was denied.

Barranco, who has volunteered on the board for the past six years, recalled another case where a woman who had previously been convicted of attempted murder of an IRS agent lost her CPA license. “You don’t see that very often,” he said.

Barranco said that “80 percent” of today’s accounting students will face a major ethical dilemma within the first two years on the job.

“We try to make this educational for them and put a little fear into them,” he explained. “The lesson is … hey, if you do something stupid as a CPA, then there will be repercussions. Not only will you lose your license, but you could also be fined tons of dollars. There are people who lie. And if you lie and cheat, there are bad consequences that will follow you for the rest of your life. Those people need to be called to the carpet. These are good things that college students need to see and learn good ethical lessons from.”