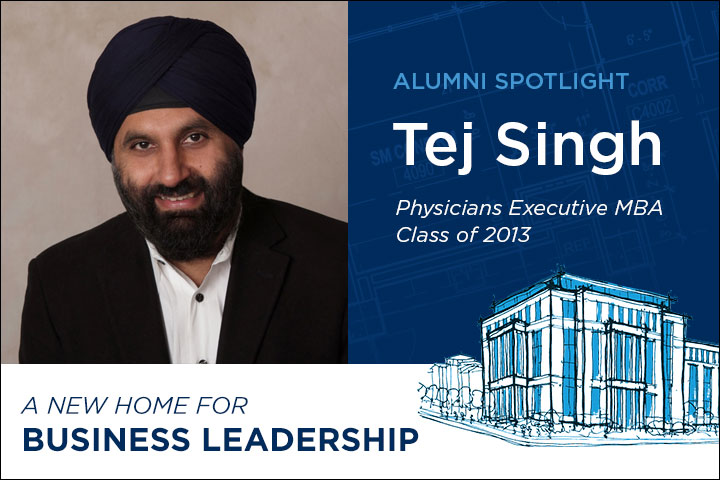 As a vascular surgeon and leader, I needed an MBA that was flexible and at the same time completed my MBA knowledge. Auburn fit perfectly."

Editor's Note: The Harbert College of Business is soaring. On September 13, we formally opened Horton-Hardgrave Hall, our new 100,000-square-foot business building. Alongside with Lowder Hall, this new addition is part of a world-class business complex that ranks among the nation’s best. What follows is one in a series of stories highlighting members of the Auburn family who have been the driving force behind our growing national reputation. To learn more, please visit harbert.auburn.edu

What could an accomplished vascular/endovascular surgeon and leader in his field take away from the Physicians Executive MBA program at the Harbert College of Business?

For Dr. Tej Singh, it was a professional paradigm shift that led to global release of a medical device with the potential to save lives.

Since 2013, the year he finished the program, Singh has been president and CEO of a groundbreaking health startup, Fist Assist Devices, LLC.

It’s centered on a device he created -- Fist Assist, the first wearable, non-invasive device that supports vein dilation for patients with end-stage renal disease prior to surgical or endovascular fistula placement. The innovation helps prevent delays or extra procedures, reducing costs for patients and dialysis providers.

I have always had some basic business skills, but as healthcare was evolving and changing, I felt I needed a formal healthcare business education."

Singh credits the PEMBA program with his arrival at this point in his career.

“The Fist Assist device -- its structure, its research and allowances, and eventual launch globally this fall -- was truly the best result of my time at Auburn, and will now be the focus of my career in the coming years,” Singh said.

He singled out Auburn colleagues and friends, including Vaughn Clagette and the late Pete Sorini, with helping him push the project along, and he said input from Auburn professors Stan Harris, Tom Baker and Amit Mitra, among others, was vital to the endeavor.

Singh, who completed his medical education at The University of Chicago and his surgical training at Stanford University, had long been recruited for positions in which he would create vascular centers of excellence.

“I have always had some basic business skills, but as healthcare was evolving and changing, I felt I needed a formal healthcare business education,” he said.

In 2012, he was on a flight from San Francisco to his vacation home in Oregon when he flipped open the in-flight magazine and landed on a bright orange advertisement for the PEMBA program at Auburn.

He said other MBA programs had a business-only focus and less time flexibility.

“As a busy vascular surgeon and leader, I needed an MBA that was flexible and at the same time completed my MBA knowledge. Auburn fit perfectly,” he said.

For the first time, he had an opportunity to work in groups and share discussions about healthcare. He cites courses in business law, marketing, healthcare economics and organizational leadership as crucial to his career development, and the workload and flexibility of the program synced well with his work as a surgeon.

After completing his PEMBA, Singh took on national leadership roles with the Society of Vascular Surgery. He has continued on his leadership track and recently completed a LEAD Personal Leadership certificate at the Stanford School of Business.

“The highlight of my time at Auburn was the business confidence and tools I received to create, protect and launch my medical device startup,” Singh said. “Yes, Auburn University gave me the direction, environment and tools for an amazing healthcare career.”