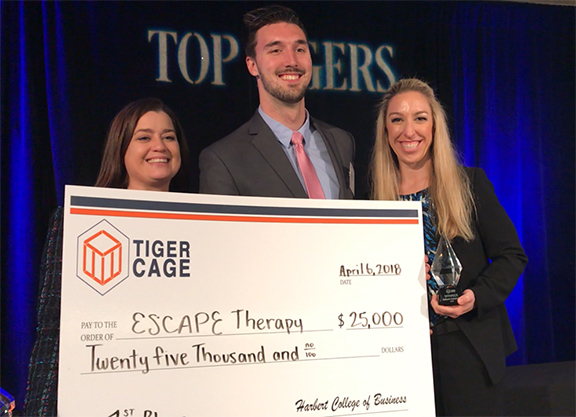 Wilson, a 1997 Harbert College finance graduate, said the judges had a “tough decision” choosing the winner.

“The team that won has an innovative idea and product that has the ability to be scalable and I think that was a big differentiator,” she said. “This team can continue to go on in these competitions and their product will be viable to a larger group of people in the end.

“Tiger Cage certainly shows me that Auburn has put together a great group of intelligent students who are thinking about innovation and entrepreneurship. I was very impressed with all four teams.”

“We are bridging the gap between a physical therapist and a patient.”

“At the start of it, it was just an idea that we wrote on paper,” she said. “We didn’t know how to write an executive summary and we didn’t know what a business model was. We knew nothing in terms of how to operate a true business.”

Then Gascon smiled and said, “But we are doctoral students and are very high achievers.”

“We had to learn all of the different aspects of how to build and develop a business – and we perfected our craft. It’s remarkable that we were here (in the finals) because we think about the first few months and it was just an idea and we didn’t know what we were doing. Now, we have business people coming up and talking to us. We received a lot of mentoring from Dr. (Lakami) Baker. That really helped direct what we wanted to say, how we wanted to say it, and what we want to think about in terms of having a successful business. This is our next adventure after school and we’re looking forward to hitting the ground running.”

ESCAPE Therapy already has a list of potential customers. “A lot of my Team USA teammates are saying, “When will this come out? We want it right now!” Gascon added.