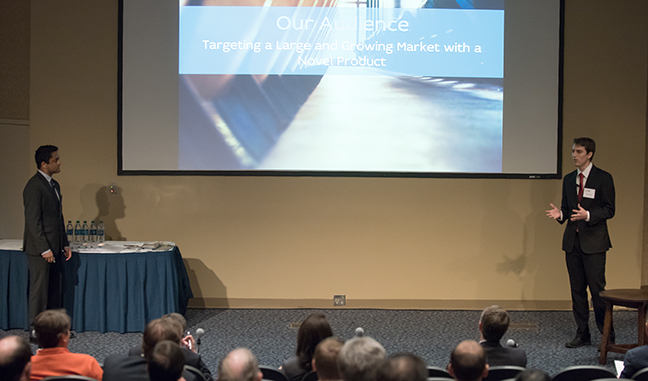 One judge boasts a net worth in excess of $400 million and the experience of being an original “Shark Tank” panelist. Three others are successful venture capitalists. No pressure, young entrepreneurs.

Two seniors in mechanical engineering impressed the group so much with their concept of a parking management system utilizing sensors and cloud-based data management that they walked away with a $10,000 grand prize in the first Tiger Cage student entrepreneurship final round on Friday, April 24.

Jonathan Philip, of Madison, Ala., and Alex Wakefield, of Huntsville, Ala., created and pitched “Parking Grid Technologies,” app-based software that alerts commuters to available parking spots on-demand, in a competition that began in October with 20 teams and ended with four finalists at The Hotel at Auburn University and Dixon Conference Center. Philip and Wakefield also walked away with $30,000 in legal funding from the Silicon Valley-based law firm of Wilson, Sonsini, Goodrich & Rosati.

Hosted by the Raymond J. Harbert College of Business in partnership with the Auburn Research and Technology Foundation, Tiger Cage rewards the best early-stage products, business concepts or services that emerge from student entrepreneurs. The panel of industry professional judges included Kevin Harrington, original panelist from ABC’s “Shark Tank” and pioneer of the “As Seen on TV” product line, who made Ginsu Knives and exercise mogul Tony Little household names.

Finalists were given 15 minutes to pitch their ideas -- showing viability and estimated market demand for the products. Winners were announced that evening at the Auburn University Entrepreneur Hall of Fame Gala, a black-tie event capping the inaugural Entrepreneurship Summit hosted by the Raymond J. Harbert College of Business.

“They (Parking Grid Technologies) showed us a good amount of clarity – they understood their market and the financial aspect of the business,” said Scott Kupor, COO of Andreessen Horowitz, a Silicon Valley-based venture capital firm, and one of six final round judges. “They made a strong presentation and they showed a need (for the product).”

“They were all very polished and it was obvious that they had done a great job of preparing,” noted Harrington.

John Mason, Auburn University Vice President for Research and Economic Development and President of the Auburn Research and Technology Foundation, relishes the role of Auburn as leader in entrepreneurship.

“Auburn University is focused on enhancing its economic development role for the state of Alabama through entrepreneurship, innovation and the commercialization of our intellectual property,” he said.

John Weete, Executive Director of the Auburn Research and Technology Foundation, added: "The ARTF is very pleased to work with the Harbert College in promoting entrepreneurship among Auburn University students and providing one year of free space in the Auburn Business Incubator to the winner."

“It’s been a very rough road to get here. We put a lot of hard work into it,” said Wakefield, who is earning a minor in Business-Engineering-Technology. “We’re both doing 18-hour semesters in engineering and it’s not been an easy task to balance this at the same time. I feel so humbled and blessed. It’s not anything that I could have done without the help from (teammate) J.P.”

Teams were mentored through the competition by industry professionals from a variety of disciplines.

“That’s been so beneficial, this whole process,” added Philip, who is also earning a B-E-T minor. “The mentorship was a huge aspect that was crucial to this. Like what (Delphinus Medical Technologies CEO and student mentor) Mark Forchette said, ‘if it’s just a business competition it’s a failure.’ Putting the mentorship part in was a game-changer in this. I know Alex and I benefited so much from that.”

As 200 gala attendees applauded the winners, one man stood in the back of the room and fought back tears. Steve Wakefield, Senior Vice President of IT at Cenveo in Stanford, Conn., and Auburn chemical engineering alum (1985), was on business Thursday in New York City. By Friday morning, he had flown to Auburn and surprised his son before the Tiger Cage final round.

“It was her idea,” Steve said, pointing at Sara Wakefield, Alex’s wife and senior in kinesiology at Auburn. “She asked if I could come support him and surprise him.”

“He’s always looked up to his dad,” she said. “Both are engineers. It was an honor to have his dad come and support him and start his own company -- just like his dad.”

Steve Wakefield, who started a consulting company in Huntsville when Alex was six weeks old, simply said, “A father couldn’t be more proud.”

Tiger Cage wasn’t the only award issued Friday night. The Thomas Walter Center for Technology Management offered the following prizes for the Most Innovative Products: